Moco Museum Amsterdam is an unique boutique museum located at Amsterdam museum district, just next to the Van Gogh-, Stedelijk– and Rijksmuseum. It offers a wide range of inspiring contemporary and modern art. The museum offers a collection of subversive art that uses humour and irony to reflect on the our modern society.

Moco Museum Amsterdam is an unique experience that is well suited for a wide audience. This is a museum that you don’t want to miss during your stay in Amsterdam, especially if you like modern pieces of art.

This new museum was founded in April 2016. Artists include the likes of Andy Warhol – famous for his popart – , Roy Lichtenstein and the anonymous Banksy.

Banksy is a mysterious yet world famous British artist who is known for his humorous and political street art. His street art can be found all over the world. The City of London even has made maps with markings of all the locations of Banksy art. His indoor pieces – unique works on actual canvas, paper and wood – have had far less exposure.

GET THE BEST TICKETS >

Moco Museum Amsterdam has several of his famous street pieces on exhibition and also a large number of his indoor works, including works on canvas. His giant ‘Beanfield’ painting is one of then, a wonderful piece that is displayed on the ground level.

It’s an impossible-to-miss eye-catcher as you enter exhibition decided to Banksy. Other highlights are the ‘Girl with Balloon’,  ‘Keep It Real’ and ‘Laugh Now’. This exhibition isn’t authorised by the anonymous Banksy. The contents also weren’t curated in collaboration with Banksy.

Villa Alsberg on Museumplein in Amsterdam

Villa Alsberg is the home of the The Modern Contemporary (Moco) Museum. It’s an old townhouse in the heart of Amsterdam with a great view of Museumplein (Amsterdam’s museum district).

The villa was designed by Eduard Cuypers back in 1904. He was the nephew of the renowned Pierre Cuypers who designed both the Rijksmuseum (located opposite of the villa) and Amsterdam’s Central Station. This former privately owned villa was one of the first homes that were built along Museumplein.

It remained a family home until 1939. In that year the house was let out to priests from the local Nicolas School in Amsterdam. Later on the building was converted into law firm office.

Small, But Built To Impress

Maximum effort was put in to ensure that the breathtaking villa makes a big impact on all  visitors. The building itself adds an extra layer to the whole Moco Museum Amsterdam experience. There is only one small drawback to the villa. It maybe a charming building but due to its compact size one can get the feeling of overcrowdedness during the more busy visiting hours.

The ‘Heart Boy’ street piece has been peremantly added to the Moco Museum Amsterdam. The massive piece weighs over 2000 kg and stands in the garden in front of the museum. This is the first and only piece of Banksy street art in Amsterdam.
The detached mural, measures over 7 feet tall (2 meters) and was created by Banksy back in 2009 on the side of a building located in Islington, London, near the famous Kings Cross Station. This mural pictures a life-size young boy who wields a wet paintbrush. The boy has just a large pink graffiti heart on a brick wall.

In 2009 the building that featured the ‘Heart Boy’ mural was selected for demolition. The owner removed the mural and kept it in his possession until he sold it to Moco Museum Amsterdam. Banksy considered variations of this work so special that he prominently featured it in his ‘Wall and Piece’ book. The ‘Heart Boy’ stencil can be found in three different locations throughout London, including the roundabout at Old Street, Tottenham Court Road, and on Rivington Street in Shoreditch.

The new museum is ranked nr. 26 out of all the 724 things to do in Amsterdam!

This attraction is open 7 days a week and is great to visit under every weather condition. 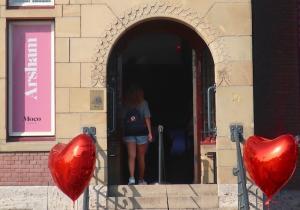 If you want to see some of the best modern art in the world, then a trip to Amsterdam is in order and the Moco Museum should be at the top of your list. This museum is home to works by Andy Warhol, Banksy & Roy Lichtenstein as well as many other renowned artists. The next time you’re looking for something interesting to do in Amsterdam, be sure to book your tickets online ahead of time so you don’t miss out on this unique cultural experience.